Yesterday, the Harbour Master attended the public slipway on the front shore within minutes of a phone call being received from a member of the public to report potential oil in the water.

Another member of staff from the Port attended with him. There was also a fisherman present during the discussion with the member of the public who reported the incident.

The Harbour Master and indeed Warrenpoint Port take these matters seriously. Photos were taken, samples were collected and the site has been monitored since.

The Harbour Master liaised with the various agencies with marine responsibility last night to try to establish what had happened. The Loughs Agency were on site this morning  and the Harbour Master and his team continued to monitor the water at the site, awaiting the arrival of NIEA.

NIEA are now on site and they have isolated a local fishing vessel. We are awaiting the results of their findings to see if there is anything of concern. We will update the public as soon as we have further information.

If anyone sees anything they are concerned about in the Lough please contact the Loughs Agency, DAERA and/or NIEA. If you contact Warrenpoint Port we can, as we were yesterday, be on site almost immediately and make an initial assessment as well as supporting the statutory agencies with an investigation. 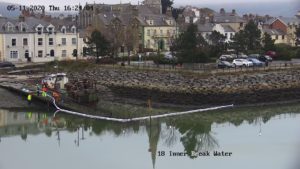